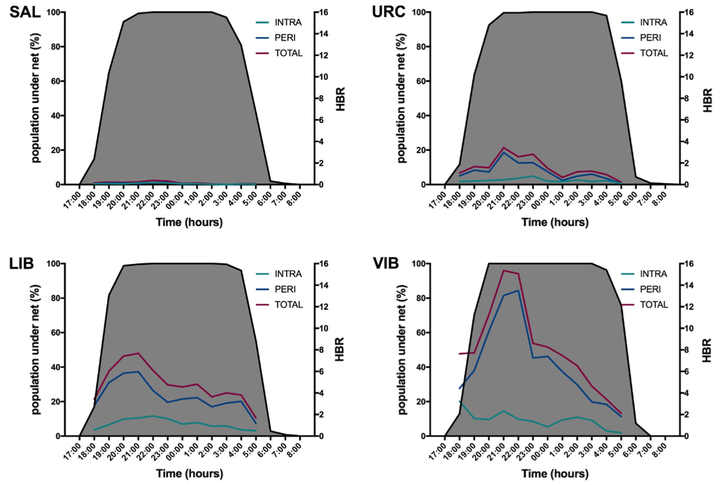 Background
Malaria remains an important public health problem in Peru where incidence has been increasing since 2011. Of over 55,000 cases reported in 2017, Plasmodium vivax was the predominant species (76%), with P. falciparum responsible for the remaining 24%. Nyssorhynchus darlingi (previously Anopheles darlingi) is the main vec‐ tor in Amazonian Peru, where hyperendemic Plasmodium transmission pockets have been found. Mazán district has pronounced spatial heterogeneity of P. vivax malaria. However, little is known about behavior, ecology or seasonal dynamics of Ny. darlingi in Mazán. This study aimed to gather baseline information about bionomics of malaria vectors and transmission risk factors in a hyperendemic malaria area of Amazonian Peru.
Methods
To assess vector biology metrics, five surveys (two in the dry and three in the rainy season), including collection of sociodemographic information, were conducted in four communities in 2016–2017 on the Napo (Urco Miraño, URC; Salvador, SAL) and Mazán Rivers (Visto Bueno, VIB; Libertad, LIB). Human‐biting rate (HBR), entomological inoculation rate (EIR) and human blood index (HBI) were measured to test the hypothesis of differences in entomo‐ logical indices of Ny. darlingi between watersheds. A generalized linear mixed effect model (GLMM) was constructed to model the relationship between household risk factors and the EIR.
Results
Nyssorhynchus darlingi comprised 95% of 7117 Anophelinae collected and its abundance was significantly higher along the Mazán River. The highest EIRs (3.03–4.54) were detected in March and June in URC, LIB and VIB, and significantly more Ny. darlingi were infected outdoors than indoors. Multivariate analysis indicated that the EIR was >12 times higher in URC compared with SAL. The HBI ranged from 0.42–0.75; humans were the most common blood source, followed by Galliformes and cows. There were dramatic differences in peak biting time and malaria incidence with similar bednet coverage in the villages.
Conclusion
Nyssorhynchus darlingi is the predominant contributor to malaria transmission in the Mazán District, Peru. Malaria risk in these villages is higher in the peridomestic area, with pronounced heterogeneities between and within villages on the Mazán and the Napo Rivers. Spatiotemporal identification and quantification of the prevailing malaria transmission would provide new evidence to orient specific control measures for vulnerable or at high risk populations.