Time-Varying Effects of Meteorological Variables on Malaria Epidemiology in the Context of Interrupted Control Efforts in the Amazon Rainforest, 2000–2017 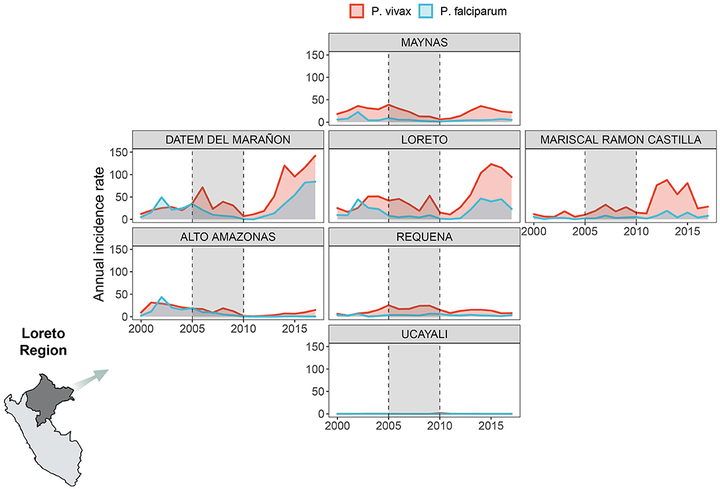 Successful malaria control interventions, mostly based on the training of health workers, distribution of insecticide-treated nets, and spraying, decrease malaria incidence; however, when these interventions are interrupted, a resurgence may occur. In the Peruvian Amazon, after discontinuing the control activities implemented by the PAMAFRO project (2006–2010)-a Global Fund-sponsored project for the strengthening of malaria control and surveillance in multiple countries in Latin America– malaria cases re-emerged dramatically. In parallel, meteorological factors determine the conditions suitable for the development, reproduction, and survival of mosquito vectors and parasites. This study hypothesized that interruption of malaria interventions may have modified the meteorological-malaria relationships over time (i.e., temporal changes in the dose-response between meteorological variables and malaria incidence). In this panel data analysis, we assessed the extent that relationships between meteorological variables and malaria changed temporally using data of monthly malaria incidence due to Plasmodium vivax or P. falciparum in Loreto, Peru (2000–2017). Generalized additive models were used to explore how the effects of meteorological variables changed in magnitude before, during, and after the PAMAFRO intervention. We found that once the PAMAFRO intervention had been interrupted, the estimated effects (dose-response) of meteorological variables on incidence rates decreased for both malaria parasite species. However, these fitted effect estimates did not reach their baseline levels (before the PAMAFRO period); variations of time-varying slopes between 0.45 and 2.07 times were observed after the PAMAFRO intervention. We also reported significant heterogeneity in the geographical distributions of malaria, parasite species, and meteorological variables. High malaria transmission occurred consistently in the northwestern provinces of Loreto Department. Since the end of the PAMAFRO period, a higher effect of precipitation and actual evapotranspiration was described on P. falciparum compared to P. vivax. The effect of temperature on malaria was greater over a shorter time (1-month lag or less), compared with precipitation and actual evapotranspiration (12-month lag). These findings demonstrate the importance of sustained malaria control efforts since interruption may enhance the links between meteorological factors and malaria. Our results also emphasize the importance of considering the time-varying effect of meteorological factors on malaria incidence to tailor control interventions, especially to better manage the current and future climate change crisis.